Book gives kids a lesson in varieties of heroism

By Greg Toppo, USA TODAY
Every child needs “great men and women to admire and imitate,” but most children would find it difficult to name more than just a handful of heroes, say Dennis Denenberg and Lorraine Roscoe, co-authors of 50 American Heroes Every Kid Should Meet(Millbrook Press). The book offers mini-biographies of heroes as diverse as journalist Ida B. Wells, Nobel Peace Prize winner Elie Wiesel, Supreme Court Justice Sandra Day O’Connor and cellist Yo-Yo Ma. USA TODAY chatted with Denenberg by e-mail. 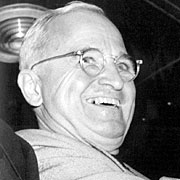 Harry S. Truman is one of only two presidents to make the book — Jimmy Carter is the second.  By Byron Rollins, AP

Q: A lot has been written about why children don’t know much about U.S. history. Why should they focus on heroes — and how will that help them understand history?

A: Learning about real heroes can help focus on the story of our past. Too often history is presented as a mere compilation of facts; emphasizing people and their achievements can draw students of any age into history’s narrative. All of us love to read about other people, but we frequently fail to guide kids into reading about the good people who have made — and are still making — our world a better place.

Q: You make several interesting choices: Tecumseh, I.M. Pei, John Muir and George Marshall, among others. What were your criteria and how many “heroes” did you start with?

A: My co-author, Lorraine Roscoe, had an initial list of 125, and mine was 175. Narrowing to 50 was incredibly difficult, especially when we reached 55 — who would be the last five to go? We wanted to help kids see that heroes are both male and female, from any race, religion, ethnic group, and from any field of human endeavor. Heroes are not perfect, but their positive achievements make them noteworthy. By the way, we show kids you don’t have to be dead to be a hero — we include several living Americans.

Q: There are only six presidents on the list, and two of them are Harry S Truman and Jimmy Carter. Don’t you have some explaining to do?

A: Simply being president doesn’t make a person heroic. We selected ones we felt were unique and whose accomplishments and/or personal traits were exemplary. Obviously, the choice with modern leaders is more controversial since we don’t have the benefit of historical perspective. Trust me, if we are able to write a sequel —50 More American Heroes— we already have several presidents on that list.

A: General Lee has certainly generated discussion among audience members in my speaking engagements. I have been asked, “Why do you have a traitor in the book, and even on the cover?” When I reply that we have several traitors in the book (Washington, Jefferson, Franklin), the point is made. Lee was a man of principle — his decision to surrender and not engage in guerrilla warfare was a momentous choice. As for Grant: Yes, many of his actions qualify him as a hero — but he just didn’t make the top 50.

Q: You ask readers to write or e-mail (www.heroes4us.com) if their heroes didn’t make the list. What are some of the names you have received? What makes them stand out?

A: Well, we certainly receive responses — especially from audience members who hand me notes with their choices. Topping the list of “Why aren’t they in your book?” are three presidents: Eisenhower, Reagan and Kennedy. We have heard from sports fans (Where’s Babe Ruth? Muhammad Ali? Tiger Woods?). What fascinates us is that we get names of heroes from so many different angles — humanitarians (Dr. Ben Carson), current “celebrities or heroes” (Oprah Winfrey), scientists, artists and so on. It is wonderful that our message about heroes being everywhere has been accepted.